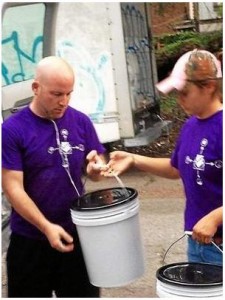 Greg Martin was serving as a church youth director when he got a calling of a slightly different kind.

In May of 2012, the day after one of many tornadoes pummeled Alabama that year, Martin says “I had this overwhelming sense that I should go do something.”

Martin, from Clarkston, texted 100 friends, inviting them to travel to Alabama with him to help.

A dozen friends answered the call, Disaster Relief at Work was born, and Martin started his on the job disaster relief training.

Martin says that there are three stages of disaster response — rescue, relief, and recovery. Martin had been involved in recovery efforts, but this was the first time he had participated in a relief effort.

“There’s no other time you go to rock bottom in one second,” Martin said. “I just was inspired by these people who had just lost everything and only cared about their neighbors. People didn’t see themselves as victims. They saw themselves as survivors.”

Martin’s idea caught on immediately and he quickly got the assistance of a law firm to file for 501c3 non-profit status, and a PR firm. He says they had an “army of volunteers” that first year responding to floods in Minnesota, to Hurricane Isaac in Louisiana, and then to Superstorm Sandy.

When a home is destroyed by a natural disaster, people need everything. Some items are in perennially short supply in a disaster, such as tarps, bathroom supplies, and cleaning supplies. People are not only struggling to take care of themselves, but also to salvage what they can of their belongings.

Martin was using 5-gallon buckets for some supplies when volunteer Chuck White said “We should do everything in buckets. That’s going to be your mascot.”

On the DRAW website, contributors can donate funds to DRAW’s “bucket list” used to supply buckets containing items to help the organization meet the immediate needs of disaster survivors.

“We try to bring supplies that no one else would bring,” Martin said.

The items that are hardest to come by are tarps, towels, industrial-strength garbage bags and nail clippers.

Martin asks contributors to “just help us with a bucket, because that bucket’s going to change someone’s life in the moment they need it.”

The key, Martin said, is preparedness.

After just two years, DRAW is expanding into a donated space in Jacksonville, Fla. Martin’s goal is to expand around the country so first responders can get cleared through background checks quickly. Expediting that requisite process would get them out to disaster sites and straight to work patching roofs, removing trees from streets, salvaging belongings, coordinating relief and whatever else needs to be done.

“We have to be the Swiss Army knife of disaster relief,” Martin said.

A gentleman helped by a DRAW team during Sandy later called wanting to help folks struck by tornadoes in Oklahoma. He told Martin “It was like you were sent from God.”

“I’ll take that to the grave,” Martin said. “It’s a privilege to be able to do stuff like that.”